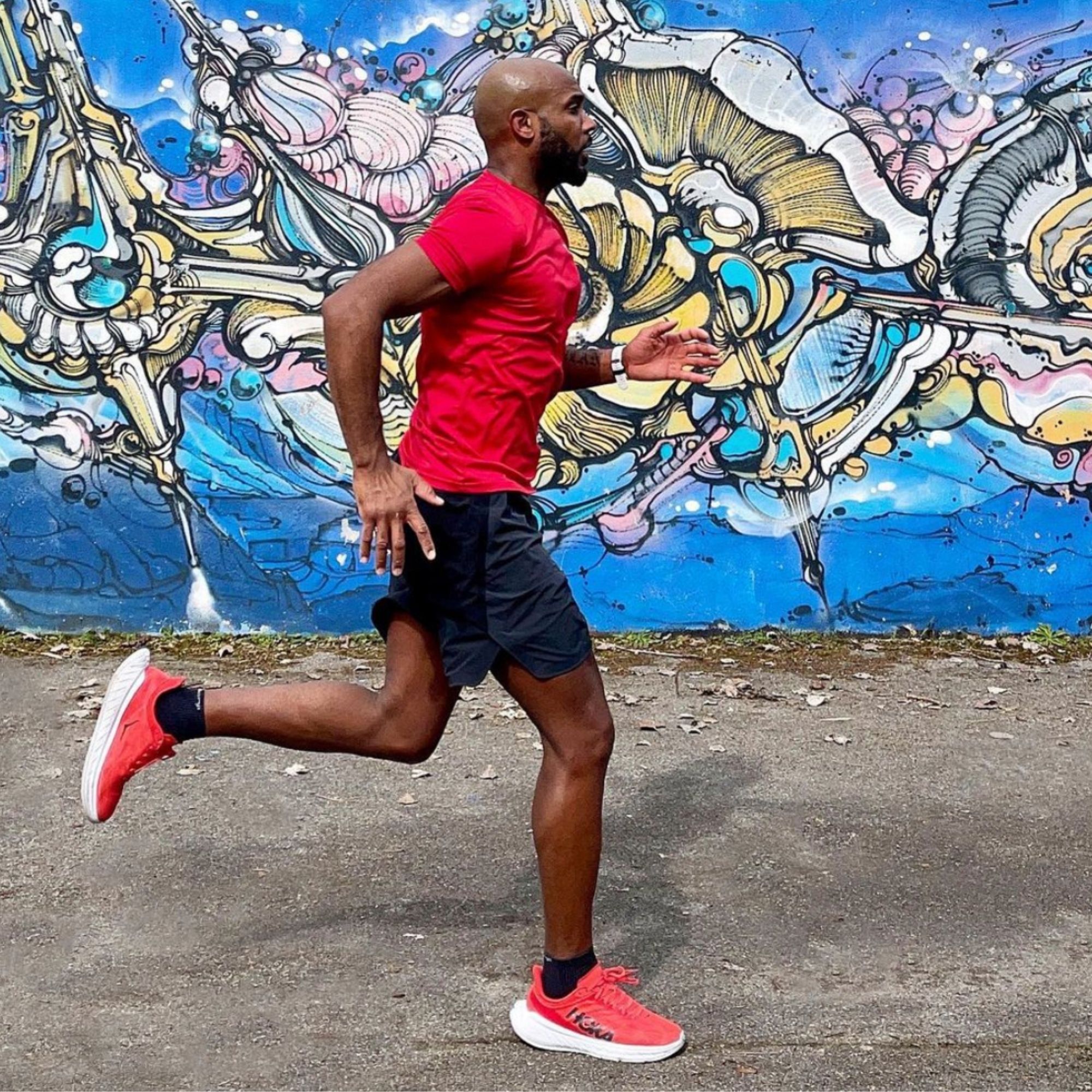 The Carbon X 2 is Hoka One One’s maximal marathon and above carbon racing shoe that helped ultra-marathoner Jim Walmsley crush the American 100k record in just 6 hours, 9 minutes, and 26 seconds, putting him 12 seconds behind the current world record and nearly 20 minutes ahead of the previous U.S. record holder. This shoe is designed for going seriously fast for a long time- but it’s pretty well mannered and comfortable enough to work into a training rotation as well. Compared to other carbon shoes, it’s an economical option as well. The bang for your buck factor here is real, people!

As someone who was a huge fan of the original Carbon X, the X2 sports a few changes that improve the shortcomings of last year’s model. Most notably, the new shoelaces are functional! This was my biggest complaint from last year- nobody should buy a shoe for $180 and have to spend extra money for laces that stay tied (I opted for Nathan Run Laces) and I am glad to report that they’re vastly improved with the X2. Other important changes are a more accommodating toebox, more structured heel counter, and a more breathable upper. It’s softer than the original, but still maintains impressive responsiveness- a great combination that keeps your legs and feet feeling fresh for miles and miles. If you liked it last year, you’ll love it now. If you were unsure before, the Carbon X 2 is definitely worth a try now.

Who The Shoe Is Good For

This shoe would work the best for cadence-focused runners seeking out a new tempo or race day shoe for most any distance marathon and beyond, but some may find that this shoe works best around the half-marathon as the cushioning is not quite as forgiving when compared to other shoes in the super-shoe class. If you’re gravitating toward this Hoka thinking it’s going to give you the same uber-squishy ride as the Clifton or Bondi, you’re probably better off looking elsewhere. For those looking for an ultra-responsive shoe with good protection from the road that’s going to help energize your faster efforts and race days, this might just be the one.

After a few different runs in the X 2, I’m confident enough in the shoe to say it’s better than the outgoing model in basically every way. The foam is softer, the fit is nicer, the upper breathes better, AND THE LACES ARE FUNCTIONAL! Hoka nailed it this year by making sure that what worked didn’t change, and what fell short received the lovins’. The price stayed below other carbon shoes as well, falling short of the “industry standard” $200 or more for super-shoes at a reasonable $180.

This shoe is an exceptional choice for high-cadence runners. While the PROFLY X isn’t quite as squishy as some of the competitor’s midsole compounds (PWRRUN PB, ZoomX), the early-stage Meta Rocker makes sure that each footfall is buttery smooth with just the right amount of cushioning to keep your feet fresh. The spring from the carbon fiber is noticeable when paired with the always-forward Meta Rocker, and I found myself constantly reminding myself to pull back the speed on easier efforts. Grip from the rubberized foam outsole inspires confidence, allowing the wearer to attack corners without a second thought. The X 2 sings a siren song of speed that’s hard to ignore.

The updates to the upper are also very welcome. It’s still mostly the same mesh without much stretch which provides good lockdown in a comfortable and light package. The X 2 breathes much better than the outgoing model which will be great for those upcoming summer runs (and in person races?). I would purchase the same size in the X 2 as the original shoe, as the length runs just about the same which is true-to-size. While the original wasn’t uncomfortable up top, the new heel counter provides a much more secure and stable fit than last year, with a wider toebox allowing for just a bit more toe splay and long-term comfort. Last year’s model fit pretty snug in the width department, especially at the end of a long run, but this is no longer an issue. As the resident Altra fanatic at The Running Well Store, more forefoot space is always a win to me. The revised upper is also incredible to look at, with Hoka really nailing the colorway choices this year. I received the blue flower/luminary green colorway, which are affectionately named “lemonade” in my strava. The yellow midsole and grey upper really do it for me, though I really love the look of all of the colorways. There were big improvements in the visual attractiveness category this year.

The Not So Good Stuff

The Carbon X 2 still comes in quite a bit heavier than other shoes in the same class. While it’s not a heavy shoe, the other options such as the Saucony Endorphin Pro come in an ounce or more lighter and offer squishier rides with the tradeoff of being more expensive. An ounce is far from the end of the world, but it could be a deciding factor when cross-shopping shoes, especially at this price point. The cushioning is also not a whole lot softer than last year, despite that being one of Hoka’s main advertising points. It’s not exactly a forgiving ride, but that isn’t the reason most people pick up this kind of shoe.

While I have a low-volume foot, I found myself with a ton of extra shoelace. This could be beneficial for those looking to lace-lock their pair or people with a higher instep, but for me it’s a minor annoyance.

After the first 10 miles in the shoe, I noticed more wear on the outsole than I have at all in my original Carbon X. This is probably due to a softer rubberized foam being used, and the grooves through the midsole are deep enough to get rid of water. It’ll be a while before I’m able to wear the outsole completely flat. I’m not necessarily worried about the grip wearing out, but it does give me concern for the overall durability of this shoe.

If you own and enjoy the original Carbon X, buying the X 2 is a no-brainer. If you’re looking for a new tempo trainer, long run shoe, or race-day weapon, the Carbon X 2 should be hot on your list of shoes to try out, especially for runners with high cadences. It’s far from the softest carbon racer out there, but if your stride matches the shoe it’s a match made in heaven. Compared to the first version, the Carbon X 2 is better in almost every discernible way, but stayed mostly true to the things that worked well last year. I’m in love with the way that feels on the run, and almost more in love with the appearance of the shoe. Though it could have been a bit softer to appeal to a wider audience, I’m giving my kudos to Hoka for this one.

Jake is an amateur ultramarathon runner who has been with TRWS for about a year and a half. He is usually seen cruising long distances at moderate paces or hitting the local hiking trails, with a road 50k PR of 5 hours. He is currently pursuing a Bachelors in Music Education at the University of Missouri – Kansas City, with his primary instrument being the Tuba. His favorite part of working at TRWS is helping new runners with footwear, nutrition, gear, and training knowledge and finding anyone that walks in the door the perfect shoe to fit their needs (and getting to write blogs about the shoes he’s passionate about).

How does it feel? The Triumph has been my very favorite shoe since I started running again in…

How Does It Feel? Mizuno recently released the 26th iteration of the Wave Rider and this version certainly…

The Bondi is Hoka’s flagship shoe that revolutionized the max-cushion running shoe market. Hoka’s Bondi is updated every…

Saucony Tempus With the Hurricane on it’s way out, the Tempus is stepping up to the plate. This…

I must tell you guys an honest truth; I have been running, and hiking in the Brooks Caldera…