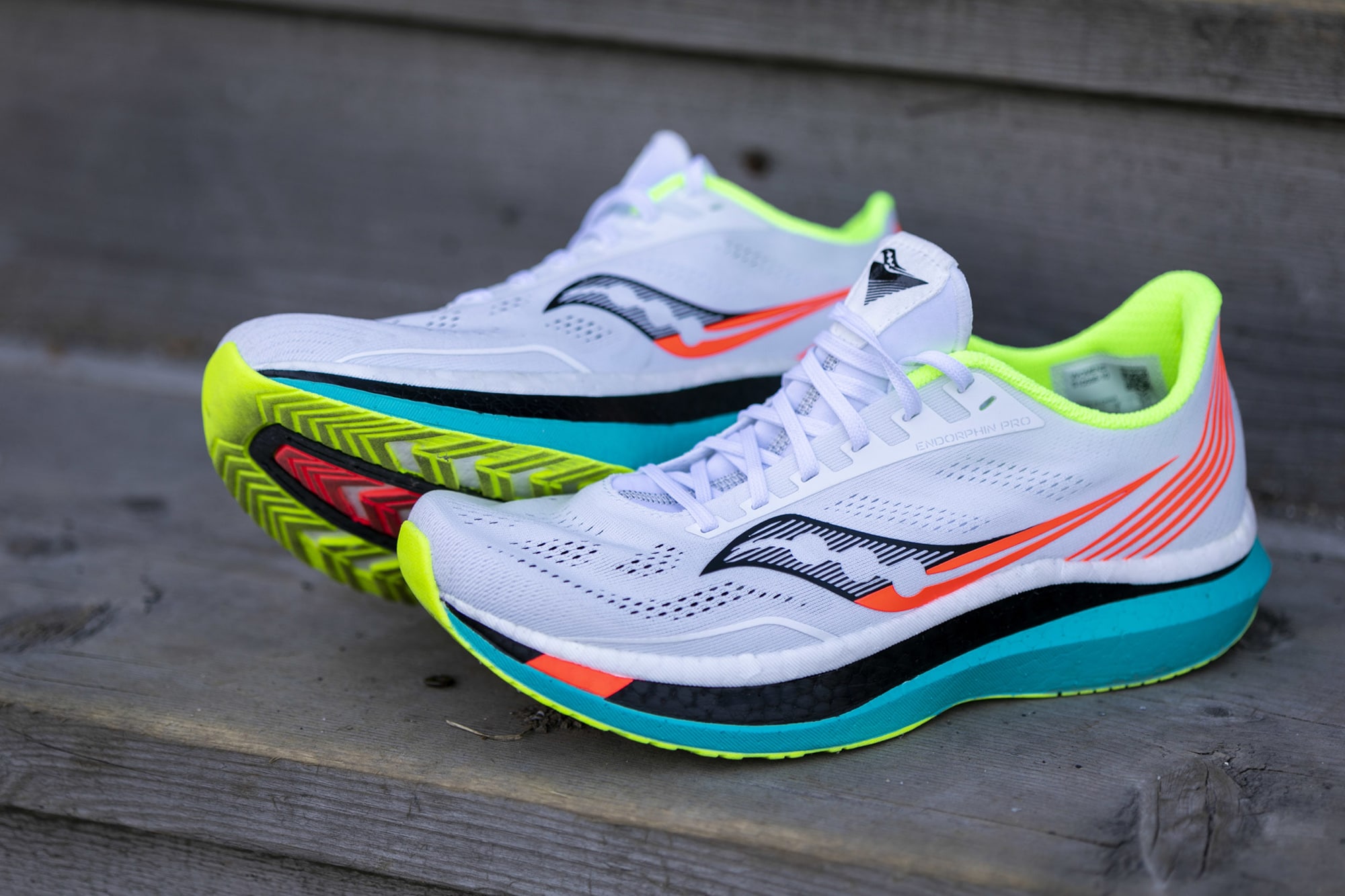 The Saucony Endorphin Collection is something special. The Shift is the daily trainer, the Speed is the work horse for workouts, and the Pro is the racer. This review will be going into a deep dive of the Endorphin Pro, and no you don’t have to be a pro to run in this one.

The Endorphin Pro offers a great monomesh upper that keep your foot kool as kool-aid. Sporting a gusted tongue, it provides a great lockdown as well. For those of you who do not know what a gusseted tongue is it means the tongue is attached to the midfoot on both sides to ensure it does not slip, and boy doesn’t. The elf ear heel may look like something out of The Hobbit and it certainly is magical. It doubles as a pull tab and a way to reduce Achilles agitation worked phenomenal without slippage. The upper utilizes what Saucony calls their Formfit technology that forms really well to the foot. I personally have a more narrow foot and it felt great, and I’ve heard of people with wider feet going up a half size and it breaking in nicely. That being said if you have a wider foot I would definitely recommend stopping by The Running Well Store and trying it on. The only complaint I have on this shoe is that I had some mild fraying on the upper by the tongue. 100+ miles one the shoes and this has had no structural integrity to the upper at all just something that has concerned me.

This where the magic happens. The midsole is made of a PEBA foam which is a highly cushioned foam with high energy return. The PEBA foam is beaded for extra durability giving this shoe a lifespan of a normal trainer, and 100+ miles in the Pro is feeling brand spanking new. Sporting an S curve carbon fiber plate sandwiched in the middle. Speaking of sandwiches, the joy of eating an ice cream sandwich (the best type of sandwich) doesn’t even come close to the joy of running in these bad boys. Being highly cushioned it really hits that sweet spot of being cushioned for the marathon distance, but not being too sloppy for speed work. I ran from double digit long runs to a downhill mile in this shoe and felt that it was the most versatile racer I’ve had AND it didn’t leav me feeling beat up the next day. Given from the Speedroll geometry Saucony has shaped the midsole in the Pro gives you that nice popping sensation only to be described as running on moon shoes.

As described before the way I like to describe the ride of this shoe is like running in moon shoes. At The Running Well Store we also carry the Hoka One One Carbon X which is a firm racing shoe with a very exaggerated yet natural rocker that flows with the natural gait well. The Endorphin pro Speedroll gives you more of a popping sensation that propels you forward with each step. This is something that Saucony executed very well and I tip my hat off to them.

Most shoes intended for racing/speed work tend to have a smaller lifespan of about 200-300 miles. The Endorphin Pro has the lifespan of your typical daily trainer, 300-500 miles. The outsole covers most of the shoe with a few places bare to low down on weight does a great job of keeping traction in all types of weather while wearing very well. I haven’t had any problems with the foam busting down on me and feeling flat. Keeping it’s pop really well the Pro does a great job of giving to the best bang for your buck. The only problem I had with durability with the shoe was minor fraying of the upper on the tongue by the collar, but it seemed to be just cosmetic, had no impact on actual performance that I could tell.Conclusion:
If you’re in the market for a fun, unapologetically fast shoe this is perfect. I took this shoe from hill repeats, to tempos, long runs, and even race efforts and it shined in every way. The Pro is the most versatile shoe I have ever worn. That being said, I am a BIG fan of the Endorphin speed which is the workout/long run warrior in the lineup. The Pro falls into the racing category and excels against competition. I would highly recommend this shoe for any types of road racing from 5k and up. Built for the Marathons I took this on multiple double digit long runs at a desired marathon pace and was cruising the entire time. No sign of fatigue for miles and the following day. If you can’t seem to get past a certain barrier when racing or want something to give you that edge look no further because this may be the solution. Going for $199.95 at The Running Well Store stop by and get yours while we still got them. (sizes may vary due to stock)